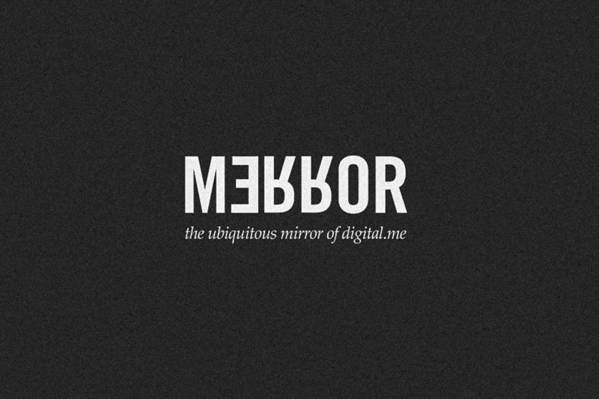 The goal of our group as part of this project semester in experimental media is to create an audiovisual interactive installation that deals with the digital identity of humans and the fact that most people, nowadays, nourish some sort of "digital me". No matter if young or old, a vast majority of people in the western world now uses social media in order to be able to attend some sort of parallel world on the internet. Most of us realise that the digitized identity of an individual often doesn"t really match with the individual itself, made from flesh and blood. There is a huge discrepancy between "digital me" and the actual persona. But maybe we have to ask ourselves if these two identities that most of us have aren"t meant to be equal? People make themselves look prettier before uploading their photos on the internet, they only post things they"re proud of, while keeping all bad things secret. People use fake names, they lie about their age, and some create totally new and unique digital replicas of themselves.

The absurdity of our time, that we use these replicas to communicate with other replicas, the fact that we increasingly use these channels, in combination to the loss of control of the "real me" as a trace-appearance, portrays a very profound and interesting base for an interactive multimedia art installation as part of the project semester in the name of experimental media. The installation is meant to satisfy the project-related requirement of a projection mapping and should furthermore cover other disciplines in the field of media art and technology as well.

More specifically, the project group would like to create a walkable three dimensional space that enables visitors to gather realization and consciousness about the topic. Multiple interactions will lead to a loss of control over their "digital me", which should be intensified by video and audio content and therefore be able to be felt in a physical manner. We would like to create an impact that points out that sensations in the digital persona can and will have a huge and uncontrollable effect on the real person.

A loss of control in either the digital or the real identity, will heavily affect the other. This leads us to the question, why women and men of any age strive for a digital, improved version of themselves in first place. This second version remains alive, even when the original version has passed away, it is often less close to us than a good friend and you can change anything about this second identity at any time. Technically speaking, the installation should therefore maneuver the visitor in some sort of process, which brings the distance between the "digital me" and the real persona closer to him or her.