The goal of the AlertnessControl is to develop occupational psychologically relevant and technical organizational measures to enhance the attention and to warn in case demanded. 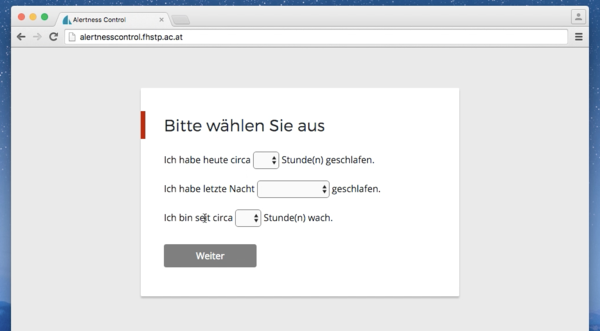 Due to shift work and long period of consecutive twelve hours, the stress on the workers in management centers is high. Especially during deviations of regular operations, increased psychological demands are placed on the staff, where the automatic operation is then partly be regulated manually, that causes inevitably risk based operation. Daytime sleepiness poses a special risk in monitoring tasks. This project focuses on enabling the dispatcher settings (FDL-STB) to set these safety critical operations on the work place. This can have major impacts on hypovigilanz, deficits in the evaluation and decision capacity as well as information processing.

The goal of the AlertnessControl is to develop occupation al psychologically relevant and technical if need be organizational measures as well as to contribute, in the determination of the current level of the attention of the person, to enhance the attention and to warn incase demanded. Further, from the gained knowledge, recommendations will be derived in view of recruitment and education.

In the framework of the project, a system will be developed to collect information on attention depending on service influence. It deals with a software, which prototypically be installed on a tablet and placed on the work place. The core parts are the analyzed and verifiably functioning tests with which, in a given time for instance ca four minutes, the attention and/or the subjective and objective level of the sleepiness can be determined. The test will be set to select the time depending on the scheduled and/or theoretic workload. Hence, there is a possibility to deny the test or to ignore at any time and to carry out anytime later. An individualized recommendation can be provided depending on the level of attention collected based on situations. This individual recommendation will be provided, in accordance with the planned attention enhancing measures that consider the workload to be performed by a given person.

A tool for "Fitness-for-Duty"

A tool will be provided for dispatchers that helps them to estimate respective level of attention or alertness better. By estimating alertness in an improved manner they can assign it to duty shifts efficiently as well as call it purposefully, when a demand arises. Thus, “Fitness- for-Duty" can be ascertained at any time.

The effectiveness of the tool (measuring attention), the activating (light, active break-time) and deactivating (napping, deep relaxing) measures will be evaluated by pupillographic sleepiness test (pupillograph F2D2). This method is distinguished by its higher level of objectivity that deals with a psychological unaware influenceable measurement method.

The intention is the application of the system in the workplace of the dispatcher. The system consequently be adapted to other workplaces. The tablet will be provided, however the participation in its application will remain optional.